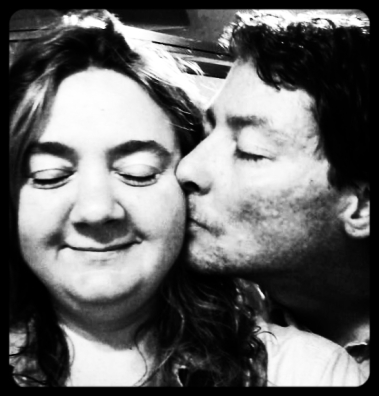 In my childhood memories, he was always there in the corner of my eye.  He would appear calm in the face of adversity or chaos, bringing sunlight to a soul walking alone, while we both waited for the moment when we would finally meet.  Did he know then, that my heartbeat followed his? My imaginary friend, my angel… the voice that kept me safe in the dark.

I wrote this for the 79th Trifecta writing challenge. Adam and me first met in 1986, when we were teenagers.  Since then, we’ve felt each others presence no matter where life has taken us, even during a 19 year stretch of time when we were out of contact, due to circumstances beyond our control.  Since then my heart beat strong when he was close by, and it has ached in a physically measurable way when we were apart. Recently his mother gave him a photo album made of his baby photos, childhood photos, every photo she had of him dating up to the present. It was a beautiful piece of artwork in itself.  Looking at his baby and childhood pictures made me realize that….I had known him all along. I knew him for years before we met. I recognized his spirit in his childhood pictures, as the imaginary friend I had, who would sometimes visit me in my childhood, especially (that I recall) between the ages of 4 and 7.  That explains why when we met that first day in 1986, both of us were overcome not with the newness of being introduced to a stranger, but with something that felt more akin to “It’s so good to finally find you. Thank God you’re really real!”

I grew up in Huntsville, Alabama in the 1970’s. From the time of my earliest memory until I was about 10 years old, my parents took me to the horse ranch that was once inside the park on the top of Monte Sano Mountain.

We went trail riding mostly, where I would be perched in a family members lap, clasping with white knuckles around the large horn of the western saddle. When I was a little older, I loved trail riding, but at the age of about 4 years old, I was in my own world on the back of a Shetland pony named Peanut. Even though he was hooked up to large wheel, like a merry go round, Peanut was my key to escaping the real world, and he was safe. He listened to every song I sang, every word I said about everything going on in my life, and never once wanted me to be quiet. Even crazier, he never wanted to stop walking around and around in a circle until I wanted him to stop.

Maybe that was my first lesson in love. It’s true you know.  Guys will run circles and go nowhere fast if it keeps a woman happy.

I think the horse ranch was closed in 1980. My parents split up that year and Mom and me moved away from Huntsville. One year not too long after that, we came back “home” to visit the mountain park and found out that all the horses were gone. To this day the barn is still there. It’s across the street from the park store, probably used for storage. The old horse trails are mostly covered with overgrowth. Very few are still open and used by visiting hikers. I think what breaks my heart the most is that most of the people who make the drive up the mountain to take in the view, don’t really stop and get out and walk around. The majority will roll down their car window and catch a glimpse of the beauty and fresh air from one of the viewpoints where you can pull over.

That’s not the same.

Somewhere in that park, there are older trees bearing the scars of when my father used to climb them so high the tree bent under his weight, and he would hang on and let gravity ride him back down to the ground. There are buried remains of weekend gatherings with family, and I bet if you look hard enough under the brush, you will find hoof prints….