I wrote this in response to this weeks Trifecta challenge. We were supposed to use this quote by Henry James as a guide.

It’s all they think about, when they watch you go out the door….

On a humid Alabama day in July of 2010, my 87 year old grandmother had a severe stroke.  She had been suffering for the last few months with lung cancer, having never smoked a day in her life. I remember thinking that her lung cancer was unfair, especially since she was already a 40 year survivor of breast cancer. I also remember praying that her end would be merciful. Her father had “stroked out” in the same manner she did, only he lived 2 years afterwards, and his long wait for freedom was agonizing. As it turned out, God was gracious enough to take my grandmother in 17 days.

She didn’t know it, but during that time, she gave the family by her side a priceless treasure.  There was a unique family reunion in what was by then, her death room. My aunt and I took shifts, watching over her as she transitioned with one foot in this world and the other already in the next.  She would occasionally come to, and want to see or speak to certain members of the family. She had important things to say to all of us. The most special moments to me were when she called on family members who were already with her on the other side. 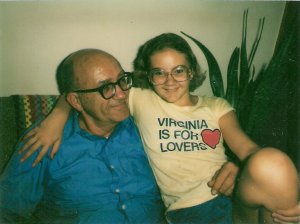 Me and Grandpa right before his sudden death

The majority of my deceased family had passed on some 30 years before, before I was a teenager. It had been a long time since I had been in their company.  Some had passed on when I was an adult, but I didn’t get to know them the way she did. None of them got to know my own children, so it made the reunions that much more special.

Most of these ascended conversations would take place for a few minutes right before sunrise. I remember the air would somehow change right as the sun would crest outside the window, and on more than one occasion her talks wouldn’t be finished, and she would call out to that person, as if suddenly they were gone. I would smile through silent tears and say, “It’s OK, Grandma. He’ll be back.” She spoke to her husband, her brother, friends, in-laws, a nephew…the one person she didn’t seem to get to speak to for some reason, that she asked for repeatedly, was her own mother.

My father told me that as soon she gave her last breath, the front screen door opened and shut. My aunt tells me she had a look of peace. She was surrounded by love, in her own home. I can’t think of a more peaceful way to go…

I like to think that when her spirit walked out the front door, that her mother, who she so longed to be with,  was walking her out and taking her to meet Jesus, who she loved her whole life.